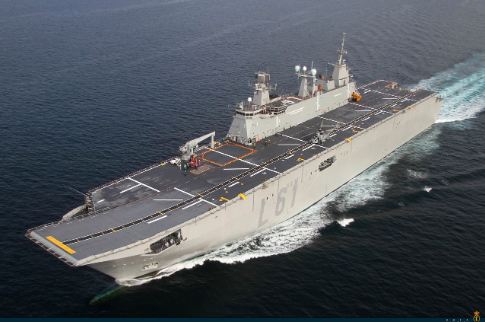 The LHD "Juan Carlos I" enables the Navy and the Army, according to their own elements and forms of action. It can also serve as an eventual platform for embedded aviation.

This multi-purpose vessel is capable of adopting at least four different basic configurations:

The LHD has a dike of 69.3 m in length and 16.8 m of sleeve with landing capacity type LCM 1E and four Supercat

The vessel may have additional Supercat units in the dike (on LCM 1E) and / or in the vehicle garage and / or vehicle loading capacity.

The design of the dyke allows to accommodate boats used by other countries, including landing units like LCM, amphibious vehicles and vehicles on air mattress.

The NH-90 and SH-3D are used as design helicopters for the spots on the flight deck so that six can perform simultaneous take-off and take-off operations.

The deck has enough space for four CH-47 Chinook helicopters to take take-off and take-off operations at the same time.

On the flight deck there is a runway and a SKI-JUMP to port with a slope at the exit of 12 °, which allows the take-off and take-off of VSTOL aircraft type AV-8B and JSF.